The pain – for many, many of us – is still severely raw. Deeply uncomfortable questions are being asked of individuals and corporations, and even more so of local and national government.

It all feeds into a tide of emotion that even now, several days later, remains highly volatile.

Conspiracy theories and barely-checked rage fuel what many feel was a completely avoidable loss of so many lives at the Grenfell Tower fire of 14th June 2017.

But: there’s a time for questions, and then there’s time for action.

While the as-yet-unnamed Simon Cowell-led charity single is likely to be the focus of the musical headlines, it’s good to see the Gospel music community already in action too.

Heart of the Community

London City Mission and The Message Trust are responding to this from the point of view of not just the Grenfell Tower fire, but also the earlier London Bridge and now, yesterday’s Finsbury Park attack.

They are calling for prayer and fasting for London and our nation, tomorrow, Wednesday 21st June.

It takes place at

Anthony King (you may know him as the popular compere Pass Da Mic) has been tirelessly working Facebook over the past few days.

That effort eventually ended up (a few minutes ago as I type this) in a benefit concert taking place on 25th June 2017, in the heart of the affected community at the Tabernacle Christian Centre, at 210 Latimer Road 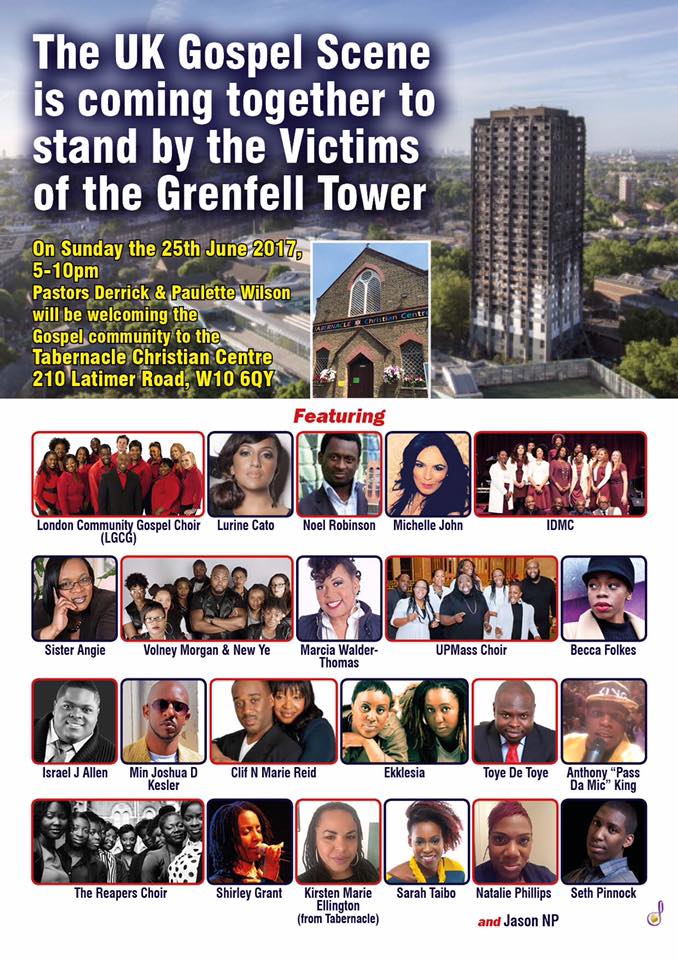 His is just one of several pockets of activity by many Christian creatives who are looking to do more than just talk but positively and proactively help those affected by the fire.

Around the same time Happi also reached out to his musician friends and partnered with clothing company Chxrch Gang.

Myself & Komenz are putting on an event on July 2nd to raise money for the #GrenfellTower victims at Camden Assembly!

They’ve lined up another benefit concert, billed as ‘Love Over Everything’, confirmed for Camden Assembly on 2nd July. 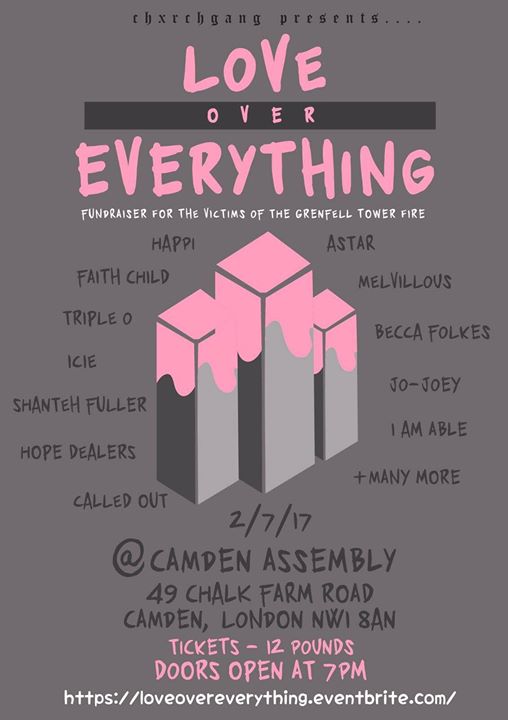 More musical tributes are starting to surface.  Simon Parry’s ‘Remember’ was actually written for an upcoming ‘All Star Kids Club‘ music project called ‘Home’, a special album for kids and families living with and going through grief.  It’s due out this summer.

‘Seeing the heartbreaking news of the Grenfell Tower, I wanted to release this song as a single to be a small comfort and hope for those who have lost so much.

The song reminds us to never forget precious times spent with loved ones. From big events to the small things like ‘frosty school days’ and ‘ favourite songs’ – they are all part of life’s precious moments that we should cherish and to hold onto the knowing that our loved ones are safe in God’s hands in heaven.

Artists For Grenfell, the Simon Cowell initiative was finally released this at midnight today and topped the iTunes chart within 2 hours of release.

A wide range of artists including Stormzy, James Blunt, Rita Ora and London Community Gospel Choir all feature on the single

This page will be updated with links to more events if and when they are announced.