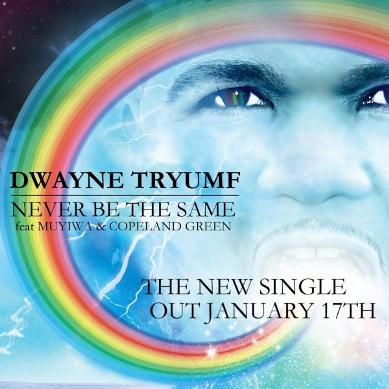 Dwayne Tryumf has responded to the ever-growing demand for the full release of his massively anticipated second album, 777 (The Mark of the Peace), with new single in the New Year.

To anyone it the know this won’t come as a surprise.  It was always inevitable.

Given the phenomenal international response to tracks put out in 2009 from the limited-edition EP taster, 777 Mark of the Peace, Tryumf sets out his stall for 2010 with another big release.

The omens are good, as it’s already hit number 1 overall on the pre-order download chart on Play.com!

The track itself builds on the incredible ‘double-time delivery’ from his massive earlier release, ‘777 Intro’, with its vocal format and hugely popular video already inspiring countless tribute and copycat styles on both sides of the Atlantic.

The 777 album itself has been a long time coming, and 2010 is the year when the huge demand for the project will finally be met.

If the Play.com pre-order response is anything to go by, the album is set to be welcomed by the wide range of people who appreciate Tryumf’s innovative mix of credible, streetwise Hip-Hop, and profound exposition of the Christian faith.

The full version can be heard on The Wade-O-Radio Show on January 8th.

Tryumf has been a Christian rap artist since 1999.  His first release was an unplanned collection of songs that became the seminal album entitled Ghetto Scripture released in 2005 through his own Tryumfant Records to breathtaking response, and heralded a new generation of deeply spiritual yet credible Hip-hop in the UK gospel scene.

Never Be The Same promo snippet